This past Tuesday around 8pm (Bombay 8pm, NYC 9:30am) I turned on CNN International to watch US voters goto the polls to elect either Trump or Clinton. It was clearly going to be the Hillary Clinton show based on all the media publications and polls who said Trump goes low and that Hillary goes high. As I was switching channels I saw that India’s Prime Minister Narendra Modi was giving a speech at the same time. I thought man, why is he trying to steal the limelight while the biggest elections in the world are happening and this guy must be talking about Swachh Bharat #2 (Swachh Bharat = Clean India). I continued to flip channels and settled back on watching CNN International. 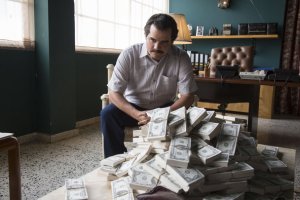 Then my phone went nuts with all the WhatsApp messages (yeah, India loves WhatsApp and not Facebook Messenger). I’m wondering if there was some announcement that CNN missed in regards to the US elections – nope. PM Modi dropped the equivalent of a nuclear bomb on the financial markets by banning the use of Rs. 500 (USD 7.40) and Rs. 1000 (USD 14.80) denomination notes in an effort to fight black money, corruption, fake currency notes and terror financing. This was not some ban that would go into effect in 1 week, 1 month or 1 year, it was going into effect in 4 hours – at the stroke of midnight Tuesday. The old notes could be redeemed at a bank over the next 2 months for new notes. Of course, if you have unaccounted wealth its going to be a very awkward conversation with the Income Tax officials to explain it. Which means most people will just burn it Pablo Escobar style like he did in Narcos. As of Wednesday morning the biggest legal tender was Rs. 100 (USD 1.48) until the new currency notes hit the market. It was a genius move by PM Modi and one that will go down as the biggest changes in the course of India’s financial markets. Yes, there is probably some hyperbole in that statement but it took real balls to pull this off by PM Modi. I guess in the end he really did launch Swachh Bharat #2 (Swachh Bharat = Clean India). 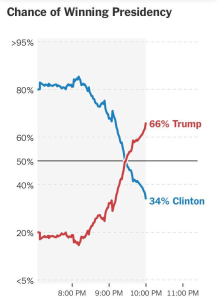 At this point, my TV remote was probably ready to retire since I was switching between 5 or 6 news channels to understand the implications of this massive announcement from PM Modi. All the while I was following the US elections on CNN and Nate Silver’s FiveThirtyEight website – which was still showing that Hillary was going to win. So, I went to bed at 1:30am in the morning (Bombay 1:30am Wednesday, NYC 3:00pm Tuesday). I got up at 5am in the morning to start watching the election results come in as the polls started to close across the country and all of a sudden the numbers for Clinton don’t look as awesome as they did just hours ago. I kept on checking FiveThirtyEight about Clinton’s chances of winning and it was like watching the stock price of a company that just announced it was being investigated by the FBI (wait, that actually did happen to Clinton). It seemed like Trump might win and the financial markets around the world were poised to open gap down.

Then it happened, Trump was able to cross the magic line of 270 electoral votes and win the US Presidential elections to be the 45th President of America. I’ll be honest, it’s still a funny thing to say, hear and type that Donald J. Trump is the next president of the United States of America. I didn’t vote for him and I really hope he only focuses on getting the economy back on track and fixing the broken political system with its special interest groups, lobbying groups and political action committees. It’s definitely wait and watch.

On another note, something that I’ve observed over the past few days is that people want to hear what they want to hear. Or in the case of online media, see or share things they have a strong viewpoint about. Of course, that’s the whole point of Facebook and Twitter to share, post or highlight content you agree with. Unfortunately, some of that content is either fake or written just to drive traffic to a page that is plastered with ads. Then there are the articles that are absolute puff pieces with zero fact checking and just published to cater to audience that likes or dislikes a particular point of view.

Below are a couple screenshots this past week from my Facebook wall. 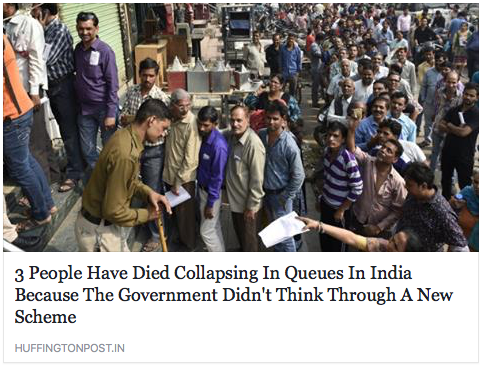 This article claims 3 people have died because they were standing in a line. Yet, they provide no information of the deceased or interviews with their next of kin. This piece definitely caters to people that are livid that PM Modi has screwed them of their hard earned black money. 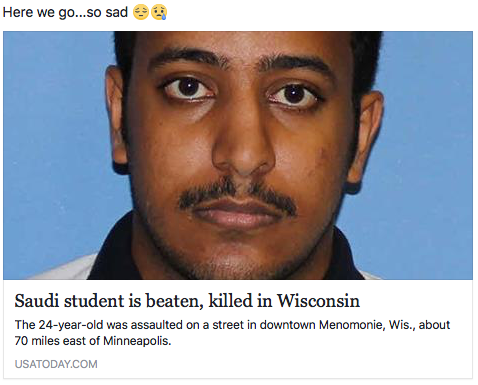 The narrative of this Facebook post I assume is that Trump is going to be President and the “shit has already started” in that minorities are being targeted. The problem is that this Saudi student died a week BEFORE the elections. Yet, people are sharing it and adding their two cents. I’m waiting for someone to share a story about Rosa Parks like it happened yesterday.

This past week both Modi and Trump did some historic things which might rub some people the wrong way. My advice is don’t blindly follow and do your own research and understand both sides of the coin.

Favorite lines comparing the US and India:
US counting votes, India counting notes.
In the US, black president leaving. In India, black money leaving.

Note: As if this blog post wasn’t long enough, I just realized this is my 500th blog post. I’m sure it’s Trump’s fault that I didn’t write 1,000 blog posts by now 😉