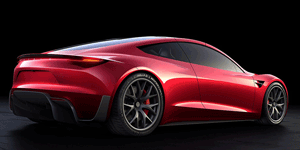 Tesla pulled a “just one more thing” at their Tesla Semi Truck event and it looks amazing – the Tesla Roadster 2.0. I’m calling it 2.0 since the very first Tesla car was a sports car and it was called a Roadster as well.

Overnight Tesla has put every hyper/super/exotic sports car manufacturer on notice. The Roadster 2.0 is beautiful and the specs are industry leading, 0 to 60 MPH in 1.9 seconds is the fastest production car EVER. I’m a hugh car fan and if I had to put down $250,000 for a Tesla Roadster 2.0 or a Ferrari 488 Spider, I would lean towards the Tesla. And that is saying a lot. If you were to ask me my top 3 car picks, they would be:

Even knowing the history of Ferrari with it’s strong racing culture and it’s exclusiveness, I would still lean towards the Tesla. To hear the engine rev or hear the exhaust note of the Ferrari 488 gets me excited every time I hear one, yet I would still leans towards Tesla. Granted I would have to see the final production version of the Tesla Roadster 2.0 but having seen other Tesla products I’m pretty sure the Roadster 2.0 is the real deal.

Ferrari and every other hyper/super/exotic sports car manufacturer is in a typical innovator’s dilemma. They stick to what they know and yet what they know is being disrupted yet they still cling to the past. The internal combustion engine (ICE) is going the way of the dinosaur and the only place to see those cars in the future will be in museums.

For the past 20 years car manufacturers have been in an arms race to shove the biggest ICE into the engine bay and get higher and higher HP (horsepower) numbers. When I bought my first car in 1996, it was a Nissan Maxima SE and it had a 190 HP engine and at that time that was a big deal for a 4 door sedan. Today, that same Maxima carries a 300 HP engine. I’m guessing most consumers don’t care about those numbers and that’s the issue, the industry is changing. Yet, someone forget to tell the big automakers about this structural shift that is happening.

If I were a shareholder of Ferrari, which is listed on the Nasdaq under the ticker symbol – RACE, I would be worried. Ferrari has capped the number of cars they produce in a year to make sure they don’t flood the market but at some point, people will no longer want ICE cars. Time and time again they have said they are not looking at EVs (electric vehicles) or SUVs (sport utility vehicle). However, they are starting to change their stance on SUVs and I’m sure sooner or later they will have to push their chips into the pot and say they are all in for EVs.