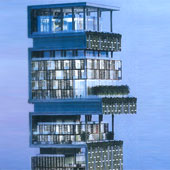 I wrote about Mukesh Ambani’s monster home called Antilla back in June 2007.  At that time I mentioned the house was “estimated at USD 1 billion dollars – that figure is definitely way off.” I was right, in the latest Forbes magazine there is talk the house (if you can call it that) will be closer to USD 2 Billion (Rs. 8,000 CR) not the paltry billion dollars.

The renderings in the Forbes article of Antilla are pretty cool looking, based on some pictures I took over the past week the structure is ONLY 50% complete as compared to the renderings.

Click for pictures of the current status of Antilla as it’s being constructed.