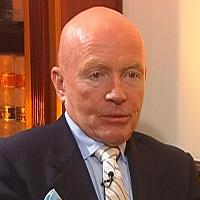 Experts on emerging markets are far and few between. One of the big guns is Mark Mobius of Templeton.  Mobius has spent over 40 years working in emerging markets and picking stocks while most others were still picking their noses in school. I had a chance to hear him speak in Oct 2007 in Bombay with 500 of his closest friends. Back in October the Sensex was on a major roller coaster ride of its own and it made his visit all the more interesting. He didn’t speak about P/E ratios, dividends, outstanding float, etc…It was more about his experiences in emerging markets and how volatile they can be.

The best story he had was about meeting a new client who had just put money into his fund right before the 1997 Malaysian meltdown. The client was trying to reach him and asked the receptionist “where is this Mr. Dubious.”

Anyways, this week he had some comments on India that were very insightful.

What are the most exciting emerging markets?
No.1 would be Brazil, by far. I mean, Brazil has been doing everything right. They’re really in a sweet spot because President Lula has made the right moves in terms of ensuring the currency is in good shape and the fiscal situation is good. And then they’re a tremendous exporter of minerals and producer and exporter of food products. The second is Russia. Commodity prices, particularly for oil and gas, have Russia flying high. As for India, we’re not rushing in because there could be more downsides.

So true…The Indian government might have survived but they haven’t done much in the area of large scale reforms.