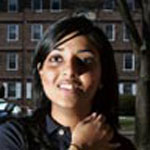 An Indian Harvard University sophomore promised to change her debut novel in future editions after acknowledging that she had unintentionally borrowed material from an author she deeply admired. Kaavya Viswanathan’s “How Opal Mehta Got Kissed, Got Wild, and Got a Life,” published in March by Little, Brown and Company, was the first of a two-book deal reportedly worth six figures. But on Sunday, the Harvard Crimson cited seven passages that closely resemble the style and language of the novels of Megan McCafferty. “When I was in high school, I read and loved two wonderful novels by Megan McCafferty, ‘Sloppy Firsts’ and ‘Second Helpings,’ which spoke to me in a way few other books did. Recently, I was very surprised and upset to learn that there are similarities between some passages in my novel … and passages in these books,” Viswanathan, 19, said in a statement issued by her publisher. What? She was surprised? She probably feels the same as me when i was surprised to learn that most of the above text appears on CNN.com.
CNN link