A couple of days ago there was an article in the DNA newspaper, an Indian daily, discussing how the high import tariffs/duties on luxury vehicles are killing the growth of high-end car sales. Well, I can’t argue with that!

But, that’s not the point of this blog post, it’s to review why there are tariffs/duties on certain products/markets and the thinking behind it. The basic idea of a tariff on imported goods is to protect the local market and give them an edge. Some may call this protectionist or nationalist but, pretty much every country does this to protect certain industries in that country. India is no different in that regard.

India has import duties on mobile phones so that local brands like Micromax have a price competitive edge over Chinese brands like Oppo and Vivo. To be price competitive, the next logical step would be for a foreign company like Oppo or Vivo to set up a manufacturing facility on the ground in India and avoid the import duties on fully assembled phones. The premise is that even if Oppo or Vivo send a large chunk of their profits back to their mother country of China, at least Indian workers have jobs. Not only are jobs created but all the other ancillary businesses would benefit from a manufacturing facility such as retail stores, restaurants, logistics companies, construction companies, etc.

Another market that India puts heavy import duties on is the automotive industry. Again the idea is to have the local companies like Maruti Suzuki, Tata Motors and other local players benefit. My issue is that I don’t see Maruti Suzuki competing in the same space as Mercedes, Ferrari or Lamborghini.

This is where the Indian government’s logic is flawed. Imagine you bring down the import duty to 50% then the sales of these high-end cars will increase. Again, consumers that are buying a Mercedes-AMG G63 are definitely NOT looking at a Maruti Vitara Brezza as a viable option. So there is no chance of Mercedes cannibalizing the sales of Maruti. In fact, you will be creating a larger ecosystem for these brands which will mean more salespeople, more mechanics, more spare parts, more locations, etc. 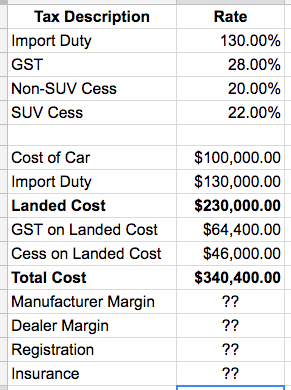 The import duties are around 240% of the cost of the car. As you can see from the above example, if the cost of the car is imported at $100,000 then you will pay $240,400 in duties. For a total of $340,400 not including registration, transportation, insurance costs and the customary flower garland that is put on new cars! And of course, don’t forget about the manufacturer and dealer margin as well.

According to the article, Lamborghini sold 26 new cars last year across India…that is pathetic for a country with a population of 1.3 billion people. I’m guessing if the duties were cut to 50%, they would sell 10x more cars and would need more infrastructure to handle it. Which would generate more jobs and taxes for the Indian government. Looking at the raw revenue numbers from the import duties is misleading since you miss out on the entire ecosystem that is created in the process.

A big thanks to Gautam Madnani of Lamborghini Mumbai who patiently answered my 754 questions on pricing!