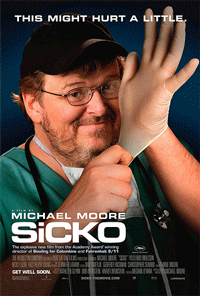 Michael Moore’s newest movie is called Sicko and will be released on June 29th. However, the movie is already on the BitTorrent network and I was able to download and watch it over the weekend. The movie is an expose into the American health care system and focuses it’s attention on people that HAVE health insurance and how broken the system is.

It talks about how the current system was created by the Nixon administration. On the secret audio tapes of Nixon that were released years ago you can hear Nixon talking to Edgar Kaiser (namesake of Kaiser Permanente) on what the role of managed care should be – make money for the providers.

The movie goes on to show how free universal health care works in other countries. They show a doctor in England’s NHS, that lives in a million dollar home, drives an Audi and makes around USD 200,000 – not bad for a government worker.

Sicko, as other movies from Michael Moore depicts how the government will say anything to get its ways, from lies about weapons of mass destruction to how bad free universal health care is.