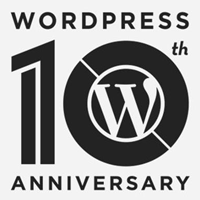 When I heard that WordPress had recently turned 10 years old it got me to reminisce about the early days of using their blogging software. Back in 2004 I was looking for a blogging software and came across an open-source software called b2. A couple guys named Matt Mullenweg and Mike Little took the open-source code from b2 and created what is now known as WordPress. According to them WordPress now powers over 18% of ALL websites on the internet.

What makes WordPress so unique is the way the company is structured around a public-private partnership with it’s users and developers. On the public side is the open-source project that is WordPress.org which is where the global community of developers gather to make WordPress faster, better, easier and safer to use.

And on the private side is Automattic which is the private company that includes properties such as WordPress.com. WordPress.com is where you go to create a personal blog. However, more and more corporates such as CNN, TurboTax and TechCrunch are starting to use their VIP services which is really the money maker for Automattic. In a nutshell, WordPress.org has an army of free developers who make the software better which is then used on the WordPress.com site.

The model has been so successful that many companies are trying to emulate the structure but honestly no one has reached the size and scale of WordPress. That might be in part to Matt Mullenweg’s focus on the open-source developer community and making WordPress into something bigger then him or Automattic. 10 years is a long time in the technology space and I can only see WordPress growing even bigger from here.

What do I hope to see from WordPress in the future? The past 10 years has been about providing a platform to allow people/companies express their thoughts. For the next 10 years, I hope the WordPress team takes a look at forums and bulletin boards which have essentially been the same for the past 15-20 years. That space really could use a public-private partnership and further the socialness (yeah, that’s not a real word) of the internet.