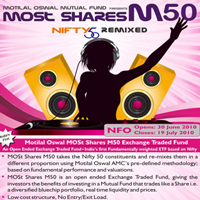 The first product out of the Motilal Oswal AMC stable was the Nifty M50 (my blog post from 3 years ago). It launched in July 2010 and was touted as taking the 50 stocks that make up the Nifty index and then “remixed according to Motilal’s predefined methodology based on fundamental performance and valuations” – their words not mine. In the marketing material for the M50 it showed how the M50 kicked the Nifty index to the curb in terms of performance.

So here we are three years later and how has the M50 done as compared to it’s main competitor the Goldman Sachs Nifty BeES? Since the M50 marketing material compared itself to the Nifty Index I add that to comparison as well.

The numbers speak for themselves, from the very beginning the M50 has underperformed as compared to the GS Nifty BeES and the Nifty Index. When it was launched it was marketed as India’s first actively managed ETF, which just means it’s a regular mutual fund that is traded on the exchanges. In the end it comes down to the fund manager and the stock selection methodology, which based on the M50 numbers has done horrible and definitely something I would not recommend investing in.

However, the news is not all gloomy for Motilal’s AMC, they do have one of the best performing ETFs on the market today – the Motilal Oswal MoST Nasdaq 100. Which as the name indicates tracks the Nasdaq index, it’s probably the best low cost instrument in India to get exposure to the US markets.

Epilogue – As I was gathering content for this blog post, I saw several articles (here and here) indicating that the fund manager Rajnish Rastogi for many of the Motilal ETFs including the Nifty M50 had recently passed away. RIP.