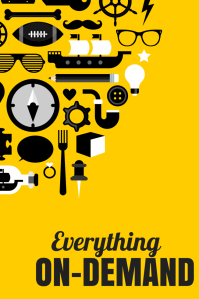 Who would have guessed that in 2009 the idea of hailing a taxi via a mobile app would spark a revolution. That is exactly what Uber has single-handedly done and kicked off what is now termed the “on-demand economy”. In the process, Uber has been estimated to be worth over $50 billion and continues to grow into new markets.

Because of Uber, there are a host of on demand services from delivering groceries, restaurant meals, laundry, home repair, car repair, etc… The list is long and keeps growing by the day. It’s still early days in India and the intense competition in these various verticals has led to a minimum of 10 startups in each category. Which explains why venture capitalists are still funding these “on-demand” startups because no one really knows who will come out on top. Since India is such a large and diverse country, I’m willing to bet that each vertical will end up with 2-3 large players in each vertical category.

Over the past several years I’ve been advising many startups on their product/market fit and technology stack. (Pro tip, to sound smart add stack to anything and people will think you are well versed in that area. Food stack, technology stack, retail stack, etc…). Many of the startups I’ve interacted with for the “on-demand” space are divided into 3 groups:

The first group seems to have gotten all the love and media attention. How many times have you read the following headline “3 IITians launch an Uber like service for X”. Initially, I used to enjoy advising those startups because we had so much to talk about in regards to the technology stack. But, when the topic turned to service delivery, business metrics and customer engagement the response was pretty much the same – oh, we’ll just hire some business development and project managers. That should have been my first clue that they were going down the wrong path. For them, the technology was more important than the consumer.

Over the past year, I’ve had the opportunity to work with several startups that fall into the second category. They have the domain knowledge of their particular space but need some hand-holding when it comes to technology. The more that I engaged with these startups the more I realized that they would be more successful because for them it was about maintaining their brand at all costs. Which meant making sure the customer was the most important piece of the equation, not the technology stack which is really just an enabler.

Many of the heavily funded “on-demand” startups built large marketing and technology teams but failed to monitor, measure and understand what the customer experience was. I can’t tell you how many times I’ve heard from colleagues that they used a restaurant delivery app and the food was delivered late, food was cold or something was missing. If you can’t get the basics right, it doesn’t matter how much awesomesauce technology you have running on Amazon Web Services because it’s not a technology problem, it’s all about the service delivery.