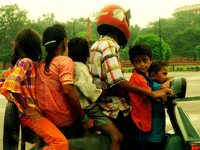 After much speculation Ratan Tata, Chairman of the Tata Group and Tata Motors, unveiled the Tata Nano, the most inexpensive car in the world at USD 2500. The idea for the USD 2500 car was conceived 5 years ago when commodity prices for things such as steel were much cheaper but Ratan Tata said “a promise is a promise” and Tata kept to it.

There are many pictures of the car floating on the web, but the picture shown is exactly the target audience the Nano is going after. The family whose primary transportation is a scooter or a 2nd car for a family that lives in an urban setting.

The minute the car was announced in India, Indian’s could understand why people would buy this car and could end up changing the game on the worldwide automotive scene. However, when reading comments from several of the int’l car blogs, it was clear some people don’t get it:

“…This is disaster for the world, and India and China… smog dispensing, CO2 emitting legions of tiny, polluting microcars”

The Nano is a rear-wheel drive, 2-cylinder, 623 cc, 33 hp engine. Engine is rear mounted. Tailpipe emission performance exceeds current regulatory requirements, and the Nano has a lower overall pollution level than two-wheelers made in India.

But instead…for a family of 6 on a scooter – as shown above.