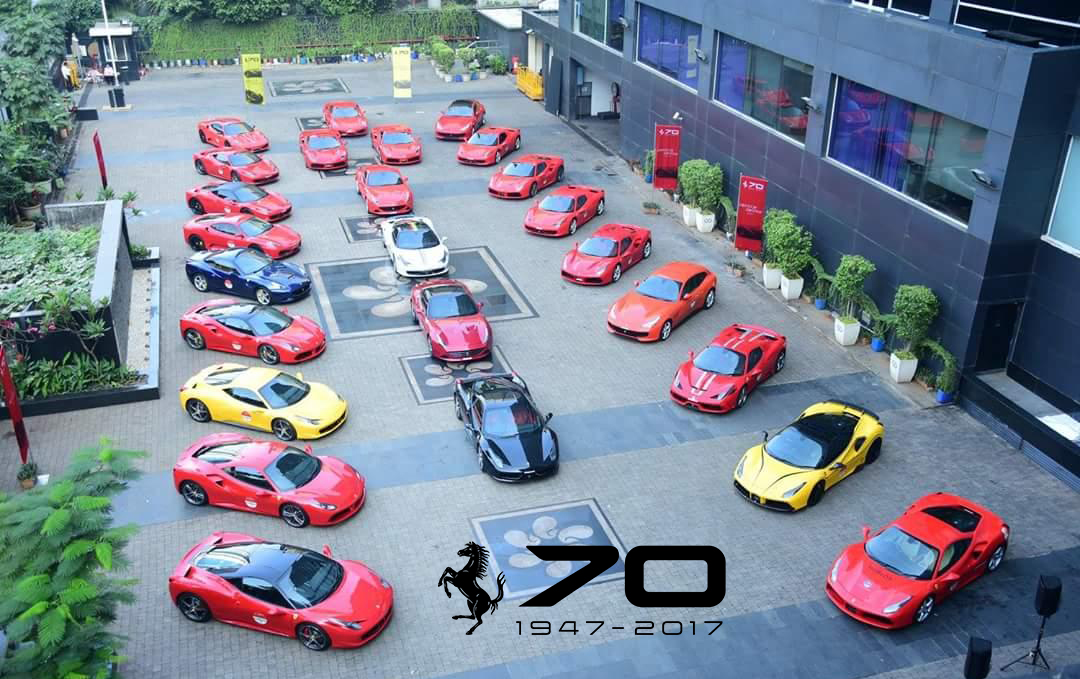 Last weekend (December 17, 2017), Navnit Motors the Mumbai dealer for Ferrari held an event to celebrate Ferrari’s 70th anniversary. A total of 25 Ferrari’s showed up and it was an amazing sight to see a sea of red Ferrari’s. If you love Ferrari’s then this was the place to be. This blog post is broken into 3 parts:

Part 1: Photos and videos from the Ferrari 70th anniversary event in Mumbai

Part 2: History of Ferrari in India
Ferrari has had a storied past in India with many of biggest names in Bollywood, business and sports owning a Ferrari. Sachin Tendulkar was famously given a Ferrari 360 Modena from Fiat as a gift in 2002 for achieving his 29th test century. Ratan Tata, Vijay Mallaya and Gautam Singhania have owned Ferrari’s as well. Gautam was the first person in India to get a Ferrari 458, that too in yellow and not the traditional rosso corsa (racing red) color. In Bollywood, Sanjay Dutt, Ajay Devgan and Imran Khan are actors that have owned Ferrari’s.

Prior to 2011 there were no dealerships to walk into and buy a Ferrari. At that time you had to work with “agents” or know someone at Ferrari to order a car. Then you had to deal with the whole issue of importing the car, getting it homologated for India, getting it registered and having a small pooja for the car before you could drive it on the roads of India. If all the sounds painful, it was. And yes, homologation is a real word. All of this was about to change in 2011.

Before we get to 2011 let’s go back to 2003 to set the stage. In 2003, Ashish Chordia of Shreyans Group was a mover and shaker with high-end clothing brands and soon wanted to make his mark on the Indian automotive scene. He was able to get a sweetheart deal from Porsche AG where his company Precision Motors would be the sole importer/distributor of Porsche products and would also maintain their dealer network. In essence, he would be Porsche’s one and only guy on the ground in India. For Porsche it seemed like a great idea since the volumes were low, they would only have to deal with one person. That turned out to be a terrible mistake on the part of Porsche AG.

By the time the financial crisis hit of 2008, Porsche customers were complaining of advances being taken for vehicles and delivery dates kept on being pushed. With Ashish controlling the entire operations in India, customers really had no recourse. Most of the issues never made it to the press, so from the outside everything looked fine.

In 2010, Ferrari came knocking and Ashish hit the jackpot and became the sole importer/distributor and dealer for Ferrari. Ashish negotiated the same setup as he had with Porsche AG. He setup Automobili Italia Pvt. Ltd. which would import and distribute Ferrari’s and sell them exclusively through his dealer network, which initially was going to be in Delhi and Mumbai. In May 2011, the Delhi showroom was opened and the Mumbai showroom was rumored to be setup in Poonam Chambers in Worli. However, that Worli showroom never opened and by early 2014 Ferrari severed all ties with Ashish Chordia.

Ashish had built a bad reputation with his customers not only at Ferrari but also with his Porsche dealerships. In fact, Fortune Magazine wrote an article about his lawsuit with Porsche which eventually led him to flee the country.

After Ferrari shut down operations in 2014, a year later it realized it needed to re-enter India and this time it would be the sole importer/distributer of cars and then it would appoint separate dealers to sell the cars. In Delhi, Select Cars was chosen and for Mumbai, Navnit Motors was chosen to cover the West and South regions of India. Navnit Motors has a long history of selling cars and also many high-end cars like Rolls-Royce, Jaguar, Land Rover and BMW. With this arrangement, Ferrari avoided many of the issues that led to their demise the first time around.

Part 3: History of Ferrari
Back in 1947, Enzo Ferrari created the 125 S which was badge as a Ferrari, the first one. It has been a 70 year journey that has created a cult like following for the “prancing horse” (The Ferrari logo) and in the process Enzo built a racing empire. Maranello, Italy is the current headquarters of Ferrari.

When I had visited the Ferrari Museum in Modena, I was surprised to learn that Enzo Ferrari had a term-sheet to sell 50% of Ferrari to Ford in 1963 for $10 million. However, at the last minute Enzo said no. But, in 1969 he ended up selling 50% to Fiat SpA, which I didn’t realize was an acronym for Fabbrica Italiana Automobili Torino (FIAT).

There is no point in me writing about the complete history of Ferrari, so I suggest you start by reading the Wikipedia page for Ferrari.