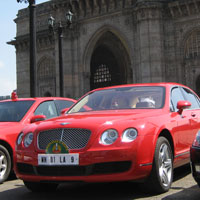 This past weekend was the wedding of Indian Civil Aviation Minister Praful Patel’s daughter, Avni. I read about it in the newspapers a couple days ago talking about how large the event was going to be, but really had no idea how large. I happened to be at the Taj Mahal Palace Hotel doing some shopping when I noticed a Bentley Continental Flying Spur (such an appropriate car for the Aviation Minister) and then saw a flurry of high end cars. I have never seen so many Benz’s in one location (except maybe Newport Beach), there had to be at least 50-60 E-class Benzo’s, not to mention all the Beamer’s, Audi’s and Landcruiser’s. I also happened to be walking around Nepeansea Road on Sunday and stumbled upon his entourage as they were entering his spacious bungalow. For those familiar with the area his bungalow is right on the sea in front of the Petit Hall complex. I’m quite sure an amazing view. I happened to get a quick 5 second video clip of the red Benz driving into the bungalow gate, in front of the Benz was the Flying Spur which i could only manage a picture of.
Pics
Video Clip

UPDATE: According to several people the Flying Spur is Praful Patel’s, but the house on Nepeansea Road belongs to Vijay Mallya of the UB Group, whose brands include Kingfisher.